Well-preserved historical layout from the mid 14th century defined by regular ellipsis with the town square in the middle is considered to be a very valuable historical heritage of Nové Strašecí.

A two-storey building with prismatic tower was build around the year 1600; it was rebuilt and repaired between the years 1791 and 1838. The rooms in the upper storey were used as offices of municipal authority, on the ground floor there used to be an inn and a prison. Currently there is an art school in the building.

Church of the Nativity of the Virgin Mary and Parsonage 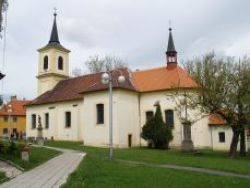 It is originally a Gothic church which is referred to as a parish church from the mid 14th century. From the original period the presbytery was preserved, lighted by originally pointed windows, the fragments of which are conserved in the masonry above the arches of the present day windows. The church nave was added after 1553 , the whole church underwent Baroque reconstruction only later. There was an extensive hexagonal belfry in front of the west frontage of the church in which three bells were placed. Though, the belfry was torn down in 1839 and then Rudolf Štěch rebuilt and enlarged it to its present form. Inside the building there are valuable Baroque furnishings.

The present appearance of the parsonage originates from the early 19th century when the building was completely rebuilt after the fire; however, the remains of the older masonry were found during the structural and historical research.
The parish house probably remains in its original place since the medieval period. The building, surrounded by late Baroque agricultural buildings, serves its original purpose till nowadays.

In 1711, St. Isidor's Chapel was built in the Prague suburb in Nové Strašecí to honour the patron saint of peasants. There used to be a life-sized wooden polychrome statue of the saint instead of a typical altar inside; the statue was special for its unusual facial expression. Due to reforms of the Emperor Joseph II the chapel was desecrated in 1783. Later it was consecrated again when a cemetery was established around the building in 1830. Due to a lack of space in the cemetery, the chapel was removed on the field beyond the town in 1912.

In the middle of a small Jewish ghetto in the south part of the town, next to the defensive wall there was a synagogue built in the mid 18th century next to which there was a Jewish school. In 1858, the synagogue was reconstructed in the Late Classicism style. In 1950, the building was bought by the Czechoslovak Church and they established their choir there.

Nové Strašecí had its own Jewish ghetto as well as many other towns. Local Jews about whom the oldest reference dates back to 1629 lived mostly in small single-storey houses in the synagogue neighbourhood and in the streets nearby. The old Jewish cemetery, referenced in 1724, was situated behind the town wall, in front of Rakovnická Gate in the west part of the town. However, there was not enough space in the cemetery, so there was established a new Jewish Cemetery on in the fields beyond the town near Pecínov. The original cemetery was destroyed by building development, but the new one has been preserved without any further change till nowadays.

Typical school building in the town square was built in 1890s by a local master mason Vojtěch Molek. The school was opened in 1897 and since that moment it has been a significant feature of the town. The building was constructed to replace older, insufficient school building next to the church which was built seventy years earlier (current museu

The building was constructed in 1928, originally as headquarters of a credit union district branch, after WWII there used to be a branch of the Czechoslovakian State Bank. In 1960, the municipal authority’s offices were relocated from the town hall into this building.