The first written reference about Strašecí dates back to the years between 1334 and 1343. Shortly thereafter the village was promoted to a small town. The emergence of Strašecí can be related to the period of John of Luxembourg reign when there were many settlements established in the Křivoklátsko region, establishments being based on the law of emphyteusis. This theory is supported by the spacious, regularly-shaped town square’s plan of a medieval origin.

Strašecí lost all its rights during the restless 15th century, so the oldest known privileges were not granted to the town by Ladislaus Jaigello until 1480; they were extended later in 1503. In the older privilege Strašecí was referred to as a small town, whereas in 1503, the king mentions the promotion of Strašecí to a town.

From the very beginning, the village was a part of Křivoklát dominion belonging to the king; therefore it was subordinated to the royal chamber. For this reason Nové Strašecí is sometimes referred to as a chamber town. However, sheriff of Křivoklát was the one to apply the right of nobility and judgement. Strašecí remained a part of this dominion until the second half of 17th century when king pledged the dominion on long-term basis and sold afterwards.

At the turn of the 16th century, craftsmen and merchants were allowed to settle down in Strašecí according to the town privilege. There were also markets held weekly and big annual fairs twice a year; the town was allowed to seal with a green wax, beer could be brewed and sold in the town. The butchers and salt traders were allowed to keep their earnings.

In 1533, a great fire destroyed Strašecí and the town had to be rebuilt. However, it was probably built in the place of former homesteads, therefore there is no way to be sure of the appearance of the original medieval town without proper archaeological research. There was no town archive preserved until 17th century; the oldest town book begins with the year 1610. The 16th century destruction of the town is confirmed also by the fact that a new name was given – from the times of the great fire the town is called Nové Strašecí (nové = new).

At the turn of the 17th century, townsmen got into many disputes with bishop as they favoured a non-Catholic religion. Because of these conflicts the town lost its privileges for a certain period of time.
Thirty Year’s War meant a catastrophe for the town; the worst of all was the great fire in 1639 started by the Swedes. The population of five hundred fairly decreased and the numbers of abandoned homesteads grew. In 1685 the king sold the Křivoklát dominion to Wallenstein family who became a new suzerainty to population of Strašecí. They were replaced by the Fürstenberks later.

Until the mid 19th century, Nové Strašecí remained an unimportant town granted with minor privileges; it had a rural character with certain proportion of crafts. There were two fires worth mentioning, in 1811 and 1812, after which the town hall and the church were rebuilt and many houses had to be reconstructed.

After 1850, there was a district created in Strašecí which later subordinated to the Slaný county; only judicial and educational districts remained in Strašecí. At those times there was population of 2.200. In this period of time, various societies and associations flourished, such as the Reader’s Club (1864), fire brigade, a youth sports organization Sokol (1869) or museum association (1894). In 1860s, the Buštěhrad Railway was built which made it much easier and faster to get to Prague and other surrounding towns; however, the railway did not improve the transport connection between Strašecí and the district town Slaný.

No significant events happened in the area during the traumatic years of WWI and WWII, not even during the euphoria of the years 1918 and 1945 or in the calm period of the First Republic. From 1949 to 1960 there was independent Metropolitan District Council in the town; later Strašecí was subordinated to the Rakovník Metropolitan District Council. 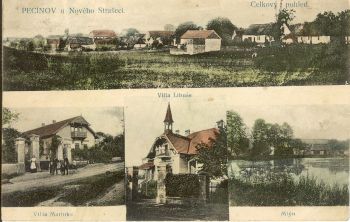